OK
BPMA uses cookies. Some may have been set already. Read about our cookies.
Please click the button to accept our cookies. If you continue to use the site, we'll assume you're happy to accept the cookies anyway.
Home → News & Events / Member Press Releases / One man’s challenge to reach the South Pole on foot in aid of the MS Society - latest Update 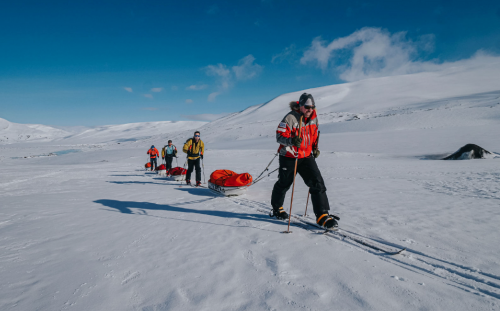 “The Pole. Yes, but under very different circumstances from those expected.”
Robert F. Scott

So the great news is that Michael Mitten, CEO of Houghton International  reached the South Pole, just not exactly how he originally intended...

After three gruelling days of skiing for 10 hours a day, pulling a sledge behind him and fighting symptoms of altitude sickness, Michael collapsed outside his tent before going to bed on Thursday night, unable to get enough oxygen to his lungs.

It turns out that, unbeknown to him, Michael had picked up a chest infection on the way out to Antarctica. This was made immeasurably worse by the high altitude. He pushed himself to his limit for three days until his body couldn’t take anymore. Worried they were going to have to get him airlifted out, calls were made by the team to a doctor via the sat phone and he was diagnosed with the chest infection. Luckily Doug, their guide for the trip, was carrying antibiotics so he was able to start medication straight away.
The next morning they tried to set off again but Michael was unfortunately too unwell and could only make it 200m. So it was arranged for someone to come from The South Pole to rescue him on a snow mobile. A three hour trip each way at -30 degrees.

I spoke to Michael while he was waiting to be rescued and he was absolutely devastated, but there was nothing he could physically do. He arrived at theSouth Pole on Friday where he had to camp for two more nights before flying back to Union Glacier on Sunday evening. He’ll have to wait there until Wednesday to fly back to Chile. But at least he’s no longer at high altitude.

I spoke to him today and he says that the four guys stationed at the Pole were brilliant and looked after him amazingly well, as have the people at Union Glacier since he arrived there last night - HE IS INCREDIBLY GRATEFUL. They have all confirmed he made the right decision not to carry on, not that he had much choice in the matter!!

He’s managed to have a shower with a bucket of warm water and change his clothes for the first time in over a week. Because of that, along with four days of antibiotics and no more altitude, he’s finally starting to feel on the mend. Thankfully!

So far Michael’s managed to raise over £15k for the MS Society and a whole lot of awareness for the charity while he’s at it. He was really thrilled to hear how much he has raised already and is grateful to everyone who has sponsored him so far.

With all the preparation in the world, nothing could have prevented him from  getting ill, and I think you’ll agree he has still achieved something massive. You can sponsor Michael at www.justgiving.com/polesapart2019

There will be more updates and photos from the man himself when he’s able to communicate via phone and WiFi etc. Until then, we are hoping he gets better very soon, the boys and I are missing him very much, and are looking forward to him returning home safe and sound on Saturday!!

https://polesapart2019.com/
Back to Latest News