OK
BPMA uses cookies. Some may have been set already. Read about our cookies.
Please click the button to accept our cookies. If you continue to use the site, we'll assume you're happy to accept the cookies anyway.
Home → News & Events / Member Case Studies / Certa pump proves ideal for yeast transfer at major independent brewery 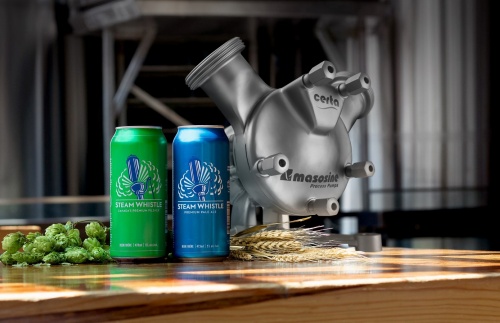 Yeast is arguably the most important ingredient in the brewing process. This single-cell organism takes simple sugars such as glucose and maltose, and produces alcohol and carbon dioxide – the latter giving beers like Pilsners its essential fizz. With these thoughts in mind, when yeast is pumped around a brewery, the utmost care is required so as not to cause any damage that could degrade its effect.

One such brewery aware of this important fact is Steam Whistle, where a MasoSine Certa pump from Watson-Marlow Fluid Technology Group (WMFTG) is being put to good use. The Certa 100 was originally supplied to the Toronto-based brewery as part of a brewhouse designed by global leaders in brewing equipment Esau & Hueber. It has now been repositioned for use as a portable pump solution for the effective and reliable transfer of yeast.

By their inherent design, MasoSine Certa pumps do not damage the all-important yeast cell, improving the fermentation and therefore the overall quality and taste of the beer. Taste is very important with the consumer and provides breweries with their market differentiation. As a result, breweries require a process that ensures the overall taste does not change from barrel to barrel.

Steam Whistle story
Over the past two decades, Steam Whistle has grown from a dream hatched by the fireside into one of Canada’s largest and most loved independent breweries. Steam Whistle’s Pilsner is brewed at the historic John Street Roundhouse, near the base of Toronto’s famous CN Tower. The Roundhouse once served as Canadian Pacific Rail’s steam locomotive repair facility, powering the trains that helped pioneer the nation, and thus inspiring the brewery’s name.

As a point of note, Steam Whistle is one of the only remaining Pilsners in the world that still adheres to the strict standards of the Bavarian Purity Act of 1516. There is no corn syrup, no foam enhancers and no artificial preservatives; the company brews using only pure spring water, malted barley, hops and yeast.

The challenges of pumping yeast
There are certain challenges associated with the pumping of yeast. For instance, pumps should be low-shear types to prevent possible yeast damage. Here, MasoSine pumps supplied by WMFTG are proven to be very effective. Fortunately for Steam Whistle, one such pump was close to hand.

The three-vessel Esau & Hueber brew house on site at Steam Whistle offers a rate of 125 hl @ 12.0°P for wort treatment, water balance and CIP. Designed and engineered in accordance with ULc, CSA and TSSA-CRN regulations, the latest brew house technology is deployed to ensure optimum wort quality and efficiency.

Supplied as part of the brew house package, the MasoSine Certa 100 was seen as being useful for yeast transfer duties in other parts of the Steam Whistle brewery. With support from WMFTG Canada and Senior sales engineer Fabio Martino, who have worked together to deliver numerous successful process and flow solutions to Steam Whistle in the past, including the servicing of a Bredel hose pump, the highly efficient Certa 100 is now fully portable. Steam Whistle’s specially designed cart also features a variable frequency drive (VFD) to help optimise energy efficiency even further.

Low shear, low pulsation
At Steam Whistle, the pump is used to transfer viscous yeast from multiple tanks located around the brewery as and when required. This activity has been in progress for the past 18 months and is proving superior to using diaphragm pumps. For instance, the air consumption associated with diaphragm pumps is avoided, lowering energy consumption and cost. In addition, smooth, low shear pumping is assured, while cleaning and maintenance is far easier.

MasoSine Certa pumps are purpose-designed for low shear, superior viscous product handling with virtually no pulsation. Unlike traditional pumps with rotors that cut through the fluid, Certa’s sinusoidal rotor gently carries fluid through the pump to dramatically reduce shear, while reducing power consumption by up to 50% when transferring high viscosity substances such as yeast. Ideal for the food and beverage sector, Certa pumps offer EHEDG Type EL Class I and 3A aseptic certification as standard. The Certa 100 is the smallest in a range of seven pumps that offers flow rates to 99,000 l/h and pressures to 15 bar.

Further applications
Such has been the success of the Certa 100 for yeast transfer that it has now been identified for use in a further application at Steam Whistle, with viability assessments currently in progress.

Elsewhere at the company, a long-serving Bredel hose pump is being deployed as part of a diatomaceous earth (DE) process, a cost effective and flexible filtration technology used for clarifying beer. DE can be highly abrasive, for which Bredel hose pumps are ideally suited.

www.wmftg.com
Back to Latest News